The RFCs share the same emergency procedure in case of an international disruption. This process is described in the ICM handbook.

The ICM handbook defines communication and cooperation principles as well as best practices among stakeholders to realize the best and fastest possible solution to any operational disruption on the corridors. This pre-defined procedure ensures that:

ICM processes according to the ICM Handbook are initiated in case of an international disruption on a corridor line.
The definition of such a disruption is displayed in the following chart. 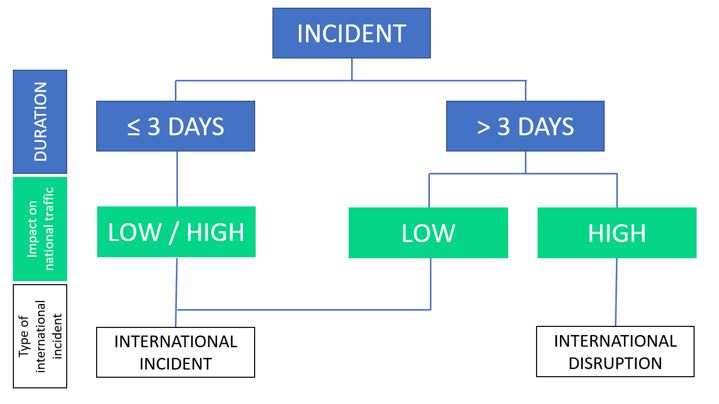 The main tasks for the RFCs in an ICM case can be summarized in two points. Firstly, the RFCs steer the coordination between the Infrastructure Managers/Allocation Bodies in case of an international disruption. Additionally, the RFCs are coordinating the development of international re-routing scenarios to serve as an off-the-shelf guide for possible deviation routes for especially difficult lines.

The ICM Handbook can be downloaded on the website of RailNetEurope.

Furthermore, the Customer Information Platform (CIP) offers an interactive map which allows users to search for a concerned line on any RFC and to receive all possible re-routing lines, including information on infrastructure parameters and restrictions.

The re-routing overview of RFC Rhine-Danube is updated annually and published along with the CID books in January each year. Adjustments may apply during the year. You can find the current version of the document and the accompanying overview of infrastructure parameters as follows: